Among the five primary senses of perception in humans, vision is probably the most precious one. Between a quarter to a third of our brain is dedicated to vision. The beauty of the universe is best appreciated through our eyes. This might perhaps be the reason that we, as a species, are obsessed with photographs. All our travels and explorations are almost always documented in pictures. Even in our most audacious and important journeys, to space, no less, we have managed to collect some extraordinary pictorial souvenirs.

Our efforts have yielded a magnificent array of pictures. These pics show our home planet as seen from space. Looking at these fascinating pictures is a profound philosophical experience. These pictures are the best proof of the relative futility of human life. Look at them, and then think about your everyday problems. I guarantee that you will realize how trivial your problems are.

The first one of these is a picture called – ‘Earthrise’. It was taken by taken by astronaut William Anders in 1968 during the Apollo 8 mission. Some have called this as ‘the most influential environmental photograph ever taken’, and Life magazine included this in its ‘100 photographs that changed the world’ list. No exaggeration there, I must say.

Here is Anders recollecting the moment of Earthrise-

“We’d spent all our time on Earth training about how to study the moon, how to go to the moon; it was very lunar orientated. And yet when I looked up and saw the Earth coming up on this very stark, beat up lunar horizon, an Earth that was the only color that we could see, a very fragile looking Earth, a very delicate looking Earth, I was immediately almost overcome by the thought that here we came all this way to the moon, and yet the most significant thing we’re seeing is our own home planet, the Earth.”

“Another fact that history recorded—one vastly more important than the score of a football game—was that it was not the sight of the moon growing in the astronaut’s window that struck people most, but the sight of the Earth shrinking. For all of the millions of years humans and pre-humans had existed, the Earth was always the thing underfoot, the thing all around, the thing that, even from orbit, could never be seen whole, never be reduced to the blue, marbleized Christmas ornament that it is—a tiny, fragile, sphere, suspended in the middle of nothing at all, with a billion billion creatures depending on it for life.”

An equally spectacular picture is the ‘ The Blue Marble‘ taken by the crew of Appolo 17. ‘Awesome’ would be an understatement to describe these pictures. This feeling of awe and wonder is beautifully captured in this exceptional short film – Overview by Planetary Collective. This will definitely affect you at some level. I recommend watching this in full-HD with headphones. Also, do check out this NASA video showing how the Earthrise picture was taken and, this wonderful guardian piece.

The next photograph is the well known The Pale Blue Dot– a gift to humanity by the great Carl Sagan. The picture was taken in 1990 by the Voyager 1 space probe at Sagan’s request from a record distance of about 6 billion kilometers!! The earth is smaller than a pixel in this picture. For a moment, just ponder over the length scales involved here, and let the feeling of your own insignificance sink in. 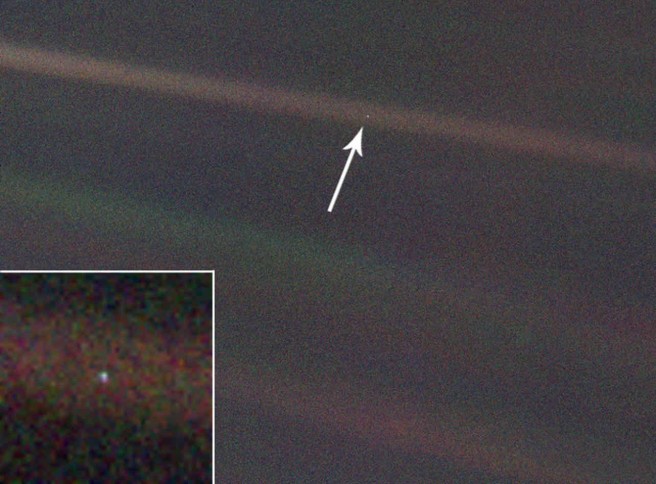 At first look, this picture seems uninteresting and ordinary. Seriously, what’s so special about a pixellated dark image with few streaks of color.  My suggestion – read Sagan’s eloquent, powerful and moving prose below and then look at the picture again. It is arguably one of the greatest scientific passages ever written. Epicness Alert.

“From this distant vantage point, the Earth might not seem of any particular interest. But for us, it’s different. Consider again that dot. That’s here. That’s home. That’s us. On it everyone you love, everyone you know, everyone you ever heard of, every human being who ever was, lived out their lives. The aggregate of our joy and suffering, thousands of confident religions, ideologies, and economic doctrines, every hunter and forager, every hero and coward, every creator and destroyer of civilization, every king and peasant, every young couple in love, every mother and father, hopeful child, inventor and explorer, every teacher of morals, every corrupt politician, every “superstar,” every “supreme leader,” every saint and sinner in the history of our species lived there – on a mote of dust suspended in a sunbeam.”

Sagan then goes on to say-

“The Earth is a very small stage in a vast cosmic arena. Think of the rivers of blood spilled by all those generals and emperors so that in glory and triumph they could become the momentary masters of a fraction of a dot. Think of the endless cruelties visited by the inhabitants of one corner of this pixel on the scarcely distinguishable inhabitants of some other corner. How frequent their misunderstandings, how eager they are to kill one another, how fervent their hatreds. Our posturings, our imagined self-importance, the delusion that we have some privileged position in the universe, are challenged by this point of pale light. Our planet is a lonely speck in the great enveloping cosmic dark. In our obscurity – in all this vastness – there is no hint that help will come from elsewhere to save us from ourselves.

The Earth is the only world known, so far, to harbor life. There is nowhere else, at least in the near future, to which our species could migrate. Visit, yes. Settle, not yet. Like it or not, for the moment, the Earth is where we make our stand. It has been said that astronomy is a humbling and character-building experience. There is perhaps no better demonstration of the folly of human conceits than this distant image of our tiny world. To me, it underscores our responsibility to deal more kindly with one another and to preserve and cherish the pale blue dot, the only home we’ve ever known.”

The pale-blue-dot picture with Sagan’s commentary has become a pop-culture phenomenon and has inspired many people including artists, writers, and scientists. A YouTube search for pale blue dot will result in countless results (#, #, #, #, #). An amazing must-read comic by Zen Pencils on the same can be found here. Sagan was one of the greatest communicators of science we have ever had. If you haven’t seen his monumental scientific documentary series Cosmos, then go watch it now. Science communication can’t get better than this. It’s breathtaking.

The series was recently rebooted with Neil deGrasse Tyson as the host. There is also this bunch of cool videos – The Sagan Series – dedicated to Sagan, in his own voice taken from the Cosmos series. Highly recommended.

The third image in this series is poetically titled – The Day the Earth Smiled. It’s a recent image taken in 2013 by NASA’s Cassini spacecraft from nearly 1.5 billion kilometers away! The spacecraft was commanded to slip into Saturn’s shadow and you can see a surreal effect of light-rays in the picture as the giant planet and its rings are backlit by the Sun. The onboard cameras of Cassini took more than 300 pictures and about 140 of those wide-angle images – taken using RGB spectral filters – were used to create this marvelous natural color mosaic (#).

You have to agree – The results are spectacular. Click on the picture for full resolution and zoom in to see the earth as a tiny blue dot in the vast dark expanse of space. Carolyn Porco, the Cassini Imaging Team Leader and the lady responsible for this splendid picture, is the Carl Sagan of our time. In fact, she was also a member of the imaging team for the Voyager mission that took the Pale Blue Dot picture. Here is what Porco, a.k.a Madame Saturn had to say about the picture-

“Now, look one more time. There, below the main rings and to the right of the globe of Saturn, far in the distance and seemingly lost in the radiance of the scene, lies a small speck of blue light, floating in a sea of stars. That is our home, with every last one of us on it … you, me, the folks down the block, even those on the opposite side of the Earth … we all inhabit that lovely blue dot.

And more than this … the image of that dot captures the very moment, frozen in time when the inhabitants of our planet took a break from their normal activities to go outside and acknowledge our ‘coming of age’ as planetary explorers and the audacious interplanetary salute between robot and maker that this image represents.I hope long into the future, when people look again at this image, they will recall the moment when, as crazy as it might have seemed, they were there, they were aware, and they smiled.”

Also, do watch the excellent TED-talk by Porco that will definitely give you goosebumps!

There are many such images of earth taken from space that inspire a sense of wonder. To end this post, here are the links to some of them-

UPDATE-1: A new image taken by Chinese lunar mission Chang’e 5-T1 is another stunning addition to this list. The blue marble and the far side of the moon.

UPDATE-2: Another worthy addition is here guys. This one is from one of the most successful NASA missions ever – Cassini. I follow its twitter feed, and the amount of visual output this mission has generated over the years is mind-boggling. Take a look. This shows the Earth as a point of light between the Saturn rings. This is almost comparable to the pale-blue-dot image. Here is the page link from the NASA website. 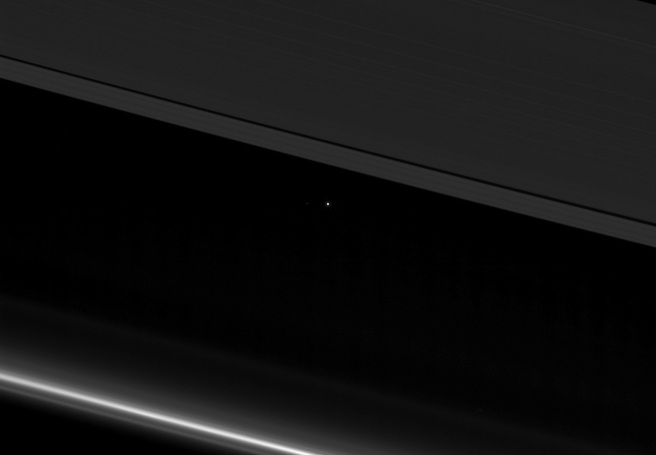